2016 year-to-date has been a very good for OSL with some hectic workloads at times whereby team members were either closing out deliverables for one project or preparing equipment in the workshop for commencement of another. Highlights to note thus far in 2016 have been the performance of a large scale multi-disciplinary survey, continued delivery of Multibeam, as well as Singlebeam, Hydrographic Surveys and a key project management role for one of OSL’s important clients.

OSL was pleased to be part of this interesting project in Q2-2016, which the OSL survey team executed offshore Trinidad and Tobago, involving the acquisition of high resolution Sidescan Sonar and Multibeam data along a 57 Km route and subsequent generation of the requisite charts and reports. Overall, 2040 man hours were committed on this project involving the use of R2Sonic, Edgetech, IXSEA, C-Nav, Teledyne-TSS, Valeport and other survey systems along a total, of just under, 450 line kilometers.

The photograph below shows one of OSL’s Senior Surveyors, Mr. Gerard Wharton, overseeing sound velocity profiling for eventual use on Multibeam data processing on board the survey vessel. 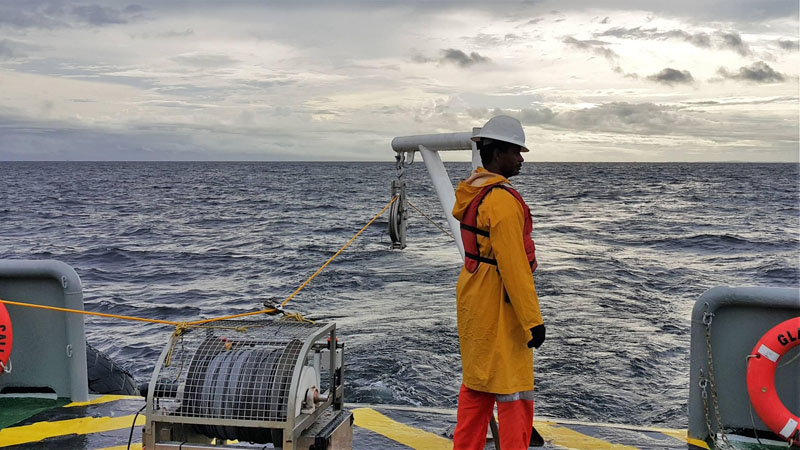 Hydrographic survey leaders in Trinidad and Tobago, and the Caribbean: delivery of Multibeam and Singlebeam Bathymetric surveys

Continuing on from where the survey team left off in Q4-2015, thus far in 2016, OSL has sustained clients seeking a quality product with flexible hydrographic solutions via technological hardware, software and sound techniques. OSL has continued to successfully operate R2Sonic Multibeam Echosounders and EIVA’s Navisuite for surveys in the Gulf of Paria, namely in the western peninsula, central and south nearshore areas. In the most recent instance, the 400khz R2Sonic 2024 was utilized for a relatively large Multibeam Bathymetry survey to ascertain existing water depths within a navigational channel and port facility. High resolutions charts showing water depths, features detected along with volume computations were used for operator guidance. Additionally, Singlebeam surveys, both large and small, were successfully performed in an effort to satisfy environmental baseline requirements, coastal modelling and pre-surveys, post-surveys and interim monitoring for dredging activities.

While these various projects were successfully delivered, or are being closed out as we speak in some instances, OSL also continued to service key clients with technical support, advice and consultancy for their Hydrographic survey, dredging and engineering (both onshore and offshore) needs. Additionally, OSL’s Stefan Deokiesingh, has been on long term assignment in an engineering project management capacity for much of 2016 servicing another important OSL client. This support is likely to continue for the near foreseeable future.

Stay tuned for further developments in 2016 and beyond.